Beauty and the Beast

Hello, ladies and gents.  This summer has been quite the roller coaster ride thus far for me and my little family.  This past week we've been dealing with storm damage and power outages in 100 degree weather.  But I do very much hope to be back on track

In the mean time, I remembered three posts I did ages ago on my Live Journal page about different fairy tales, and I thought it might be a pleasant read until we can get back into the theme of decorating again.

"I've heard it said--and my guess is you have too--that beauty is in the eye of the beholder.  But I've never been certain it's true.

Think about it for a moment.

It sounds nice, I'll give you that.  A way for every face to be beautiful, if only you wait for the right pair of eyes.  If only you wait long enough.  I'll even grant you that beauty isn't universal.  A girl who is considered drop-dead gorgeous in a town by the sea may find herself completely overlooked in a village the next county over.

Even so, beauty is in the eye of the beholder doesn't quite work, does it?

Because there's something missing, and I can even tell you what: the belief we all harbor in our secret heart of hearts that beauty stands alone.  That, by its very nature, it is obvious.  In other words, Beauty with a capital B.

This is the beginning of Cameron Dokey's book, Belle, a retelling of Beauty and the Beast.  It's a short little paperback book, but the best thing Dokey does is to really stress the question Belle puts to herself of what beauty is.  I really loved that aspect of the story, considering that my personal spirituality has been evolving over time into a sort of aestheticism...an appreciation for beauty, and what it creates.

Lately, I've been on a serious Beauty and the Beast kick.  A few weeks ago, I randomly started craving to watch Disney's Beauty and the Beast.  That led me to seeking out Sur La Lune's pages on the fairy tale, Mercer Mayer's story book, and I just finished reading Robin McKinley's excellent book, Beauty....very highly recommended, by the way.  And the  Max Eilenberg illustrated book is on its way to me, as is the classic Cocteau film.  And of course Tom and I recently watched the episode of Shelly Duvall's Faerie Tale Theater featuring the tale as well.

This fascination with Beauty and the Beast is by no means new.  I'd definitely list it in my top favorite fairy tales, along with The 12 Dancing Princesses and The Snow Queen.  But for some reason, the story is especially appealing to me right now.

I started thinking about how very sensual this fairy tale is...as in, of the senses.  Everything is described in so much detail...the cold of the chill outside the castle, the warmth of the glow of the enchanted fire, the soft petals of the rose, its smell.  But it's very very visual as well, which is why so many artists have chosen to try their hand at illustrating this fairy tale.

Ironically, in many versions, the Beast is definitely not described in great detail...only vague assertions that he is hideous.  And the way in which we (culturally) have chosen to illustrate the Beast over time has really fascinated me.  I wonder if anyone has done any scholarly work on this topic...if so, I'd love to read it.

Sorting through the art on Sur La Lune's page, and from searching books and online, I see two distinct visuals.  Artists have portrayed Beast as creatures as varied as bovines and elephants, but most often he is either feline, or boar-like. 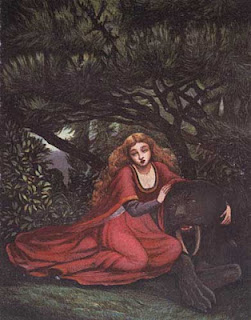 Beast, the boar, by Walter Crane: 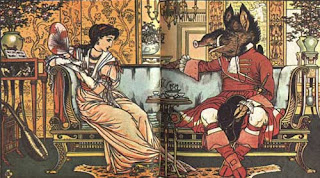 Of course Disney's Beast successfully combined some of both of these aspects in a strangely appealing visual manner: 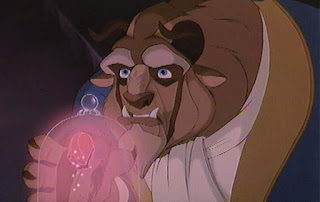 Then an interesting thing occurred when I saw an illustration of Beast by Edmond Dulac in which he resembles a freakishly strange monkey creature: 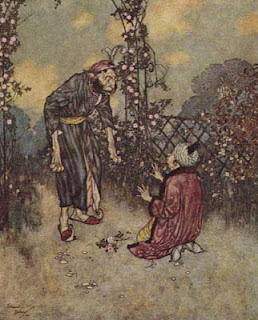 I disgustedly thought to myself "well that certainly can't be Beast.  He's supposed to be massive and strong and hairy." and that in turn made me wonder why it is that we choose to portray Beast, in visual form at least, as massive, hulking, a paragon of manly testosterone.  Is it our way of making it seem more acceptable that Beauty has to fall in love with a creature who isn't truly human, before he can become human again?  Or is it because fairy tales are of course symbolic, and as Beauty is supposed to be a paragon of womanhood, so Beast, ironically since he isn't even human in his current form, is supposed to be a symbol of virile manhood as well?

I also find it interesting that the two most common renditions of Beast are so very different.  We have the cat..a creature that perhaps works so well for Beast symbolically because there are both wild and dangerous cats, and domesticated household pets, perfectly symbolizing Beast's danger as well as his ability for grace and love.  Then there's the boar, an animal that I know little of, because quite honestly, it strikes most people as frightening, dirty, hideous, and unappealing in many ways.  The boar imagery works well for art, but it is difficult to picture the boar behaving gently and lovingly towards Beauty as they begin to fall in love.  It's certainly understandable to see why Disney went more along the route of the feline mixed with bovine for their Beast...two animals that exist in both wild and tamed forms. 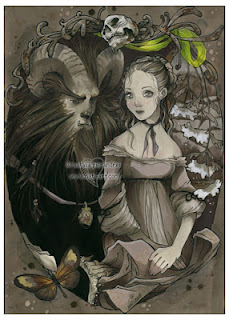 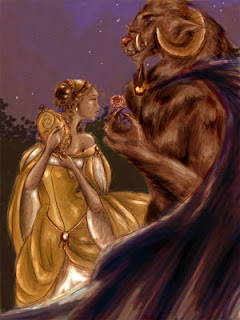 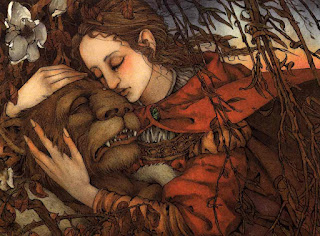 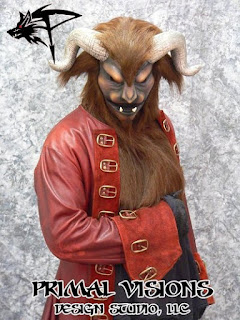 This illustration from Sur La Lune's archives (Paul Woodroffe) fascinates me as it shows Beast as quite human-like, with horns as his only real sign of inhumanity.  I also love how Beauty is playing for him.  It is quite Pre-Raphaelite looking to me. 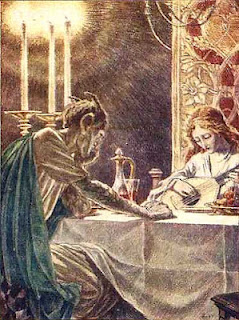 This artist on DeviantArt actually chose to portray Beast as truly frighteningly Beastly, something that few artists do.  I love the multiple eyes, and the way he looks almost like something from Chinese mythology. 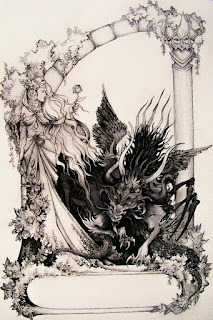 And of course, there's the show that made (and still makes) my heart melt...Ron Perlman's take as Vincent, i.e. the Beast.  Arguably the most attractive feline version of Beast ever. 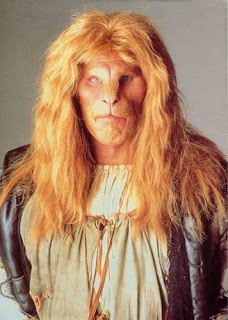 So what do you think?  What do the different renditions of Beast, and his animal-like features, mean?  In what way would you react differently to a simian Beast than a feline Beast or a porcine Beast?