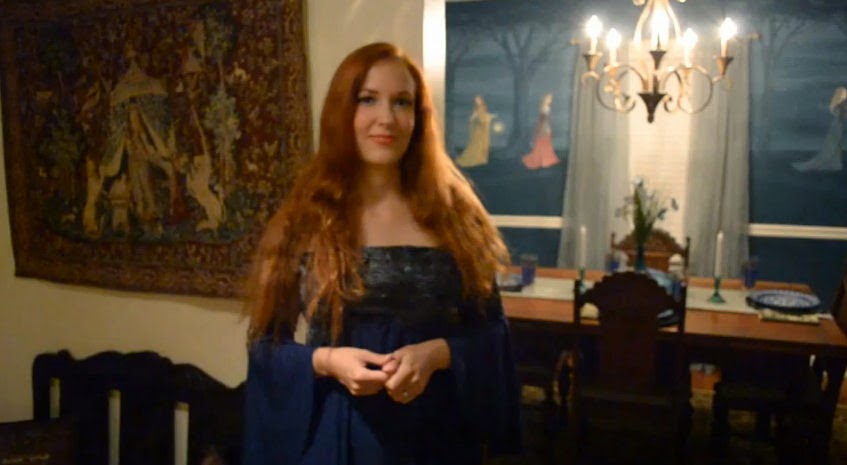 The Twelve Dancing Princesses walking in trance-like procession across all four walls of my dining room...are completed!!!  And they have been for a few months now.  But I kept hoping to get better pictures of them than the ones below...professional pictures, though I don't know how to take the best shots.  But I figured if I wait that long, everyone might have forgotten about the project before I do my "grand unveiling." 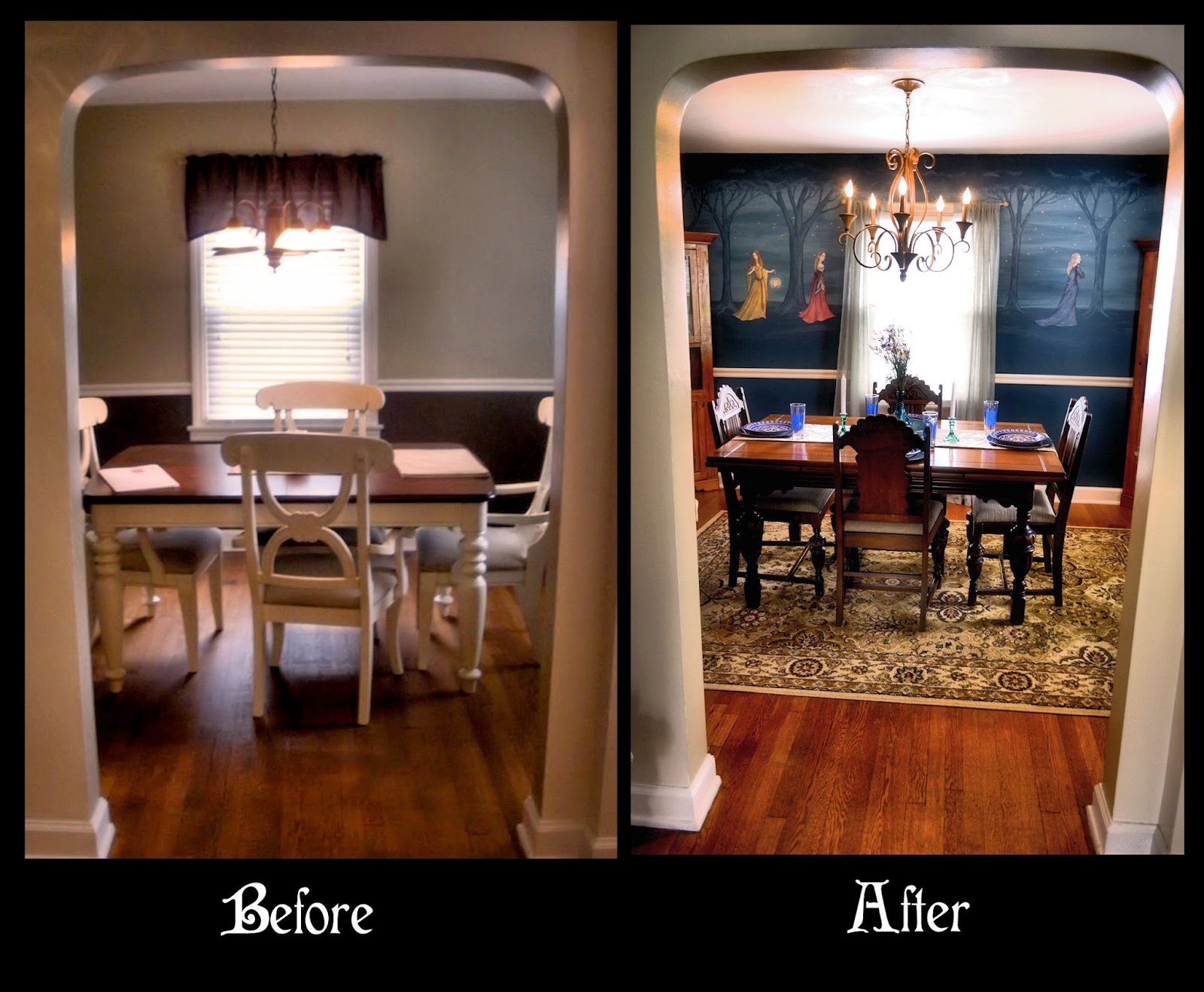 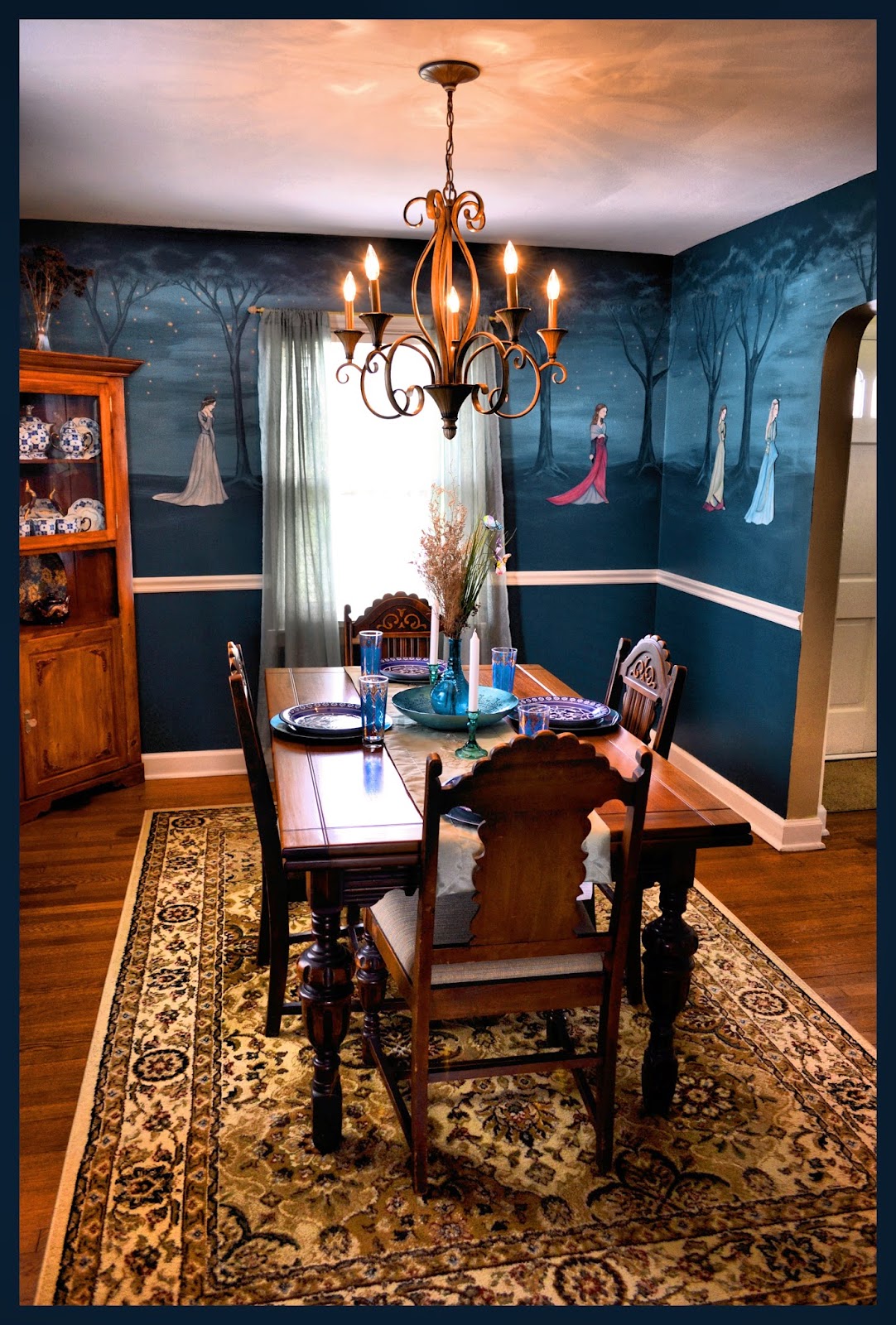 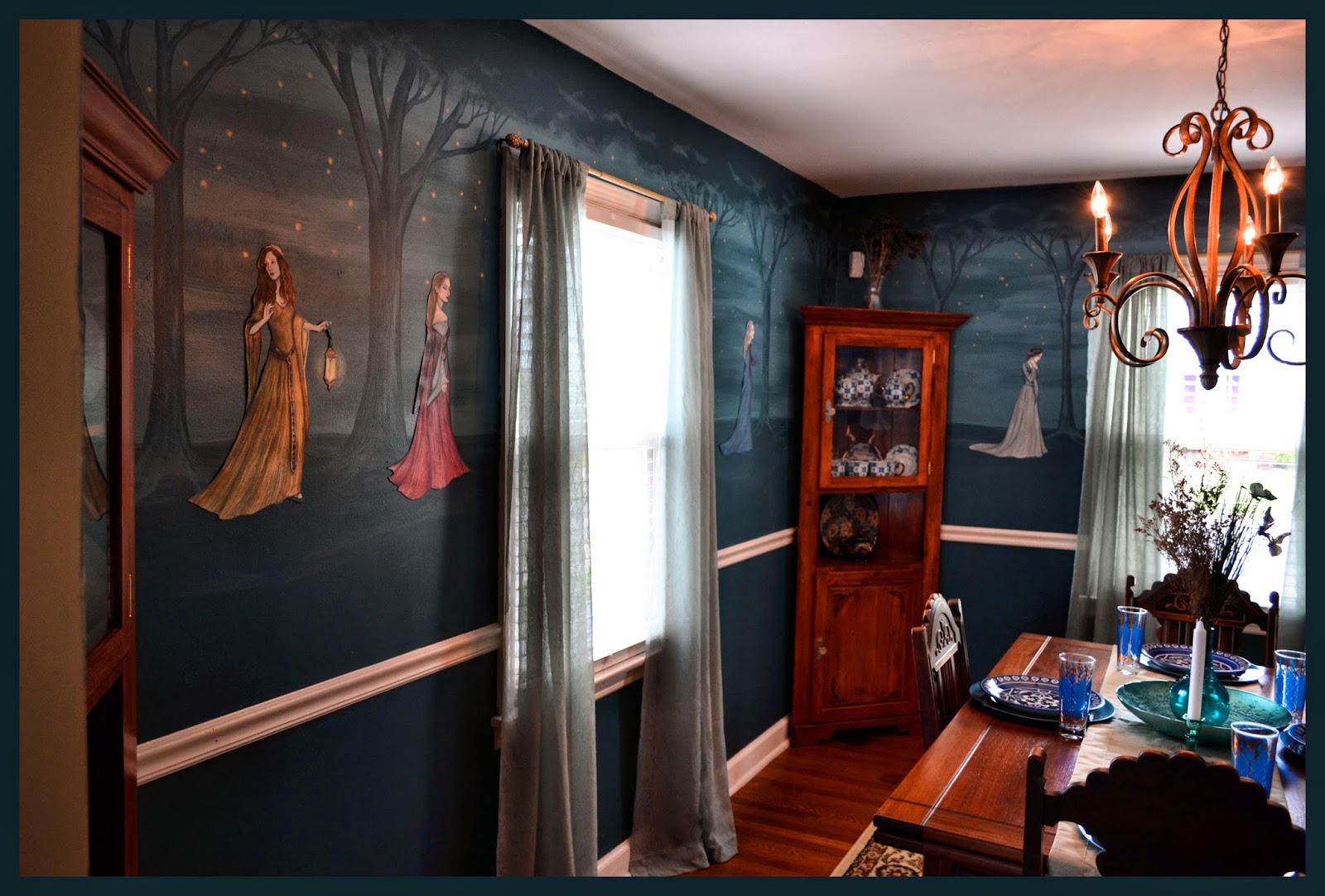 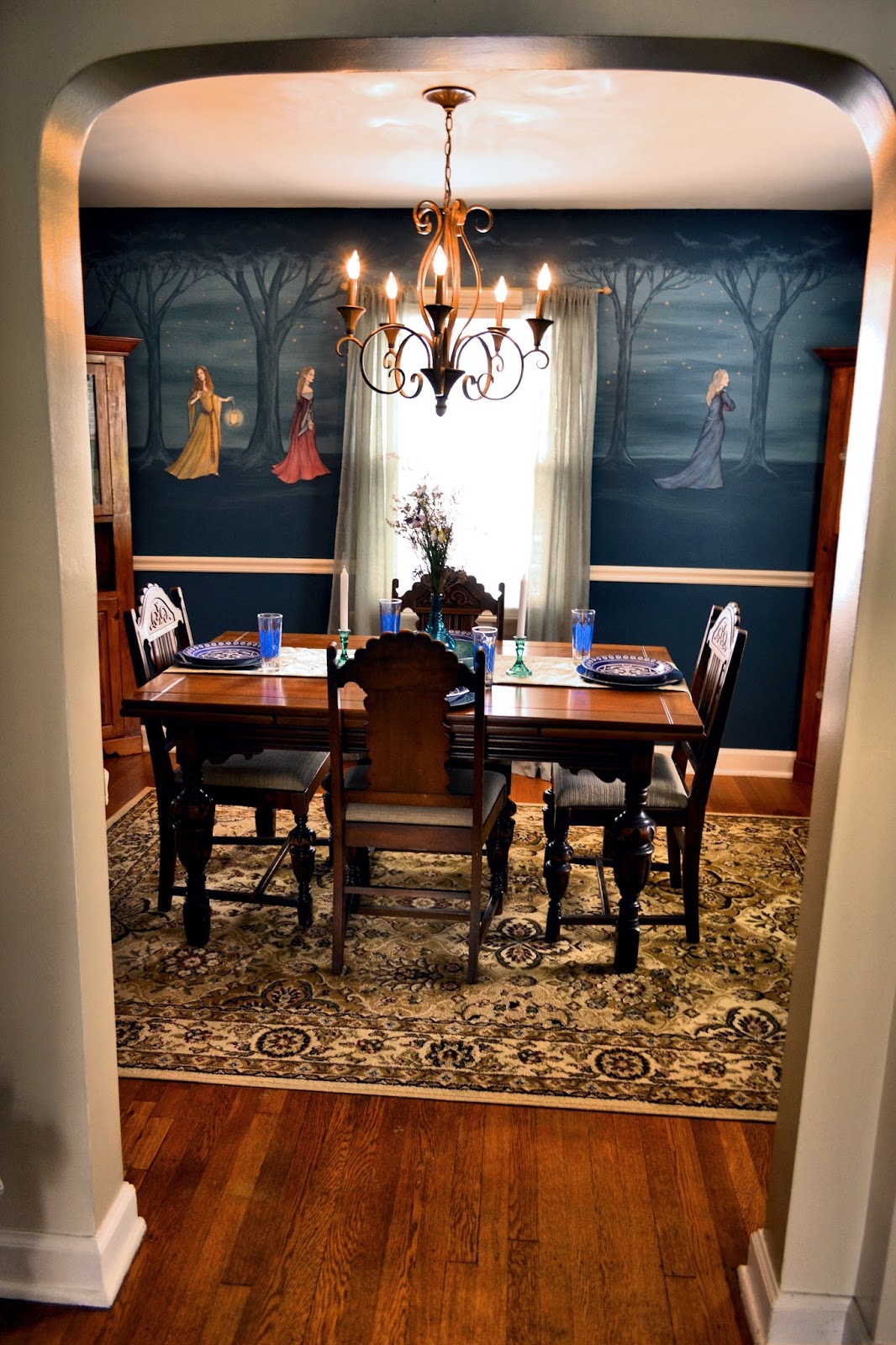 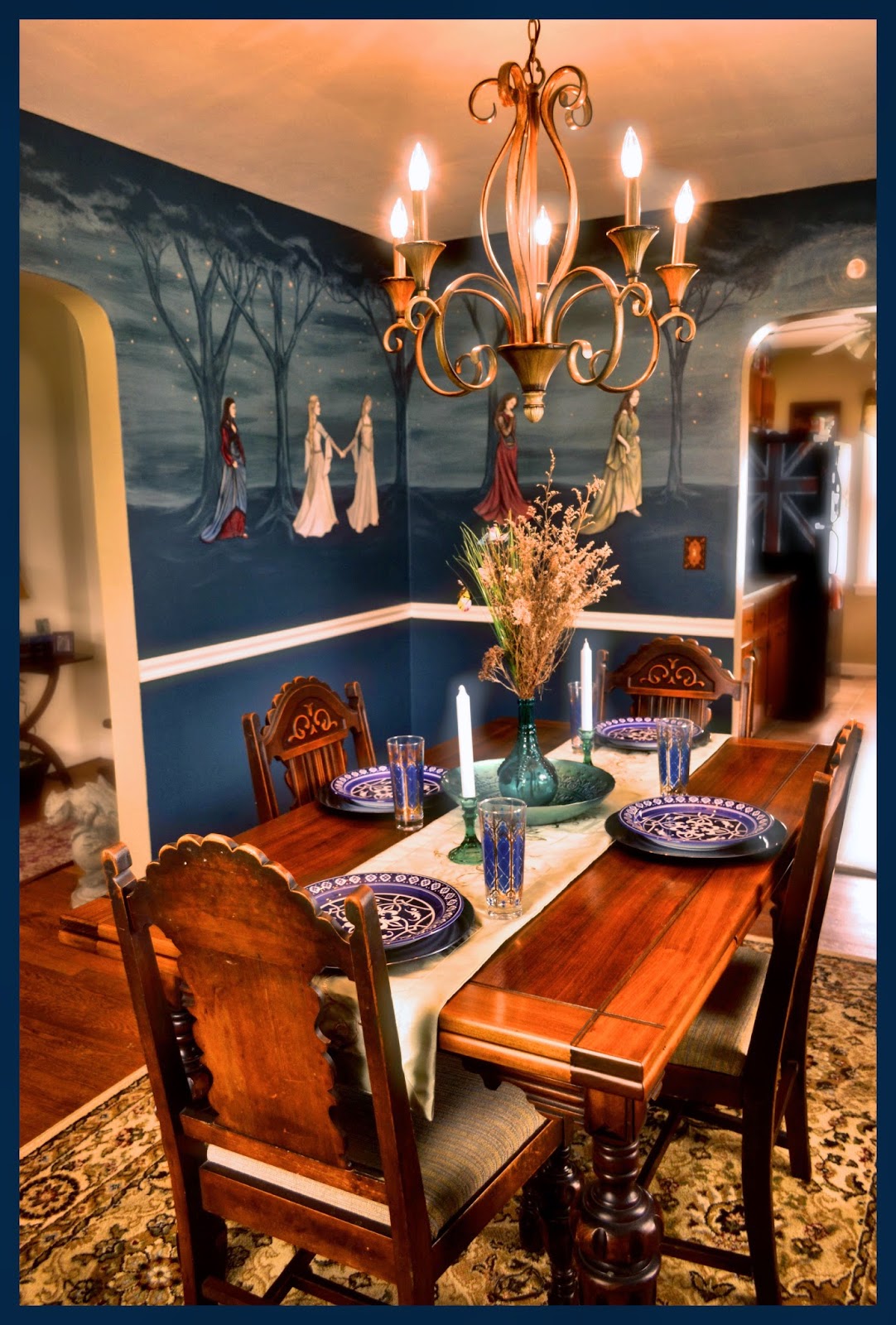 I am still having an internal argument about whether or not to add a gothic arch acorn border stencil I found online below the chair line in gold and burgundy.  I vacillate almost daily over whether I should or not.  But otherwise, the room is done!

Perhaps showing the room best of all, here's a 7 minute video tour of the room from all angles and with all the princesses featured.  Video best seen expanded to full page.


And finally, once again best seen viewed in large size, here are all twelve of the princesses!

Well.  The last time I blogged here was (head bowed) the end of March, at the tail end of the Mythic March events.  Part of the reason for this was the aforementioned personal issues, but lately I've also had the marvelous distraction of being newly appointed Deputy Editor at Faerie Magazine.  The magazine is sporting a new look, a new team, and a new direction, and I'm very excited to be a part of things.  But blogging is part of my creative identity, and it's time to shake the dust off the Domythic Bliss blog and get things started again.  (By the way...Domythic Bliss has still been very much active during the blog's dormancy over at our Facebook group!!)

Today is, of course, Midsummer, and I wanted to take a look at something so very ubiquitous to fairy tales and fantasy I simply can't believe I haven't blogged about it already.

I know a bank where the wild thyme blows,
Where oxlips and the nodding violet grows,
Quite over-canopied with luscious woodbine,
With sweet musk-roses and with eglantine:
There sleeps Titania sometime of the night,
Lull'd in these flowers with dances and delight;
And there the snake throws her enamell'd skin,
Weed wide enough to wrap a fairy in

As descriptions go, it's lovely, and also quite broad.  And of course like any of Shakespeare's plays, A Midsummer Night's Dream has been performed so many times and in so many ways, there have been countless interpretations of Titania's bower.  For the stage play, it's a theater set design dream.  And my goodness have some of the artists risen to the challenge.

First, there's my personal favorite...the Mariinsky Theater in St. Petersburg, Russia did an opera of the play. 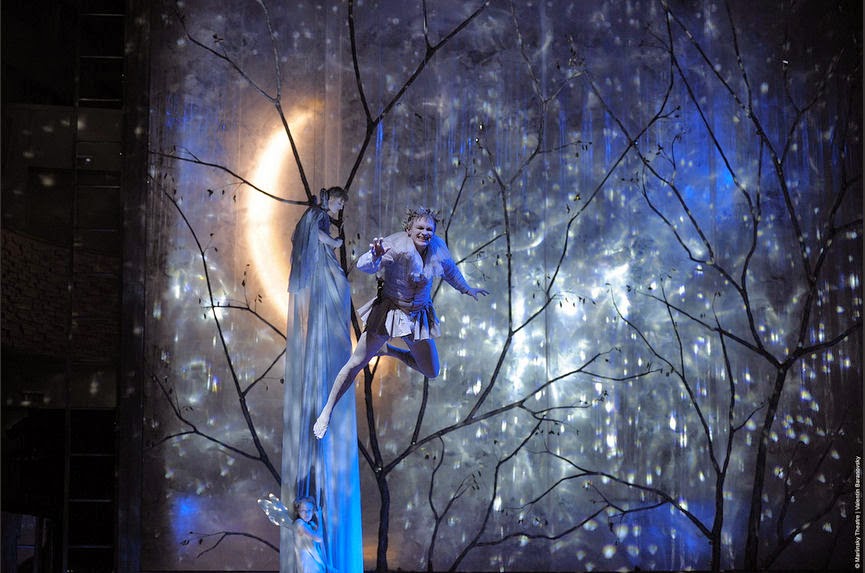 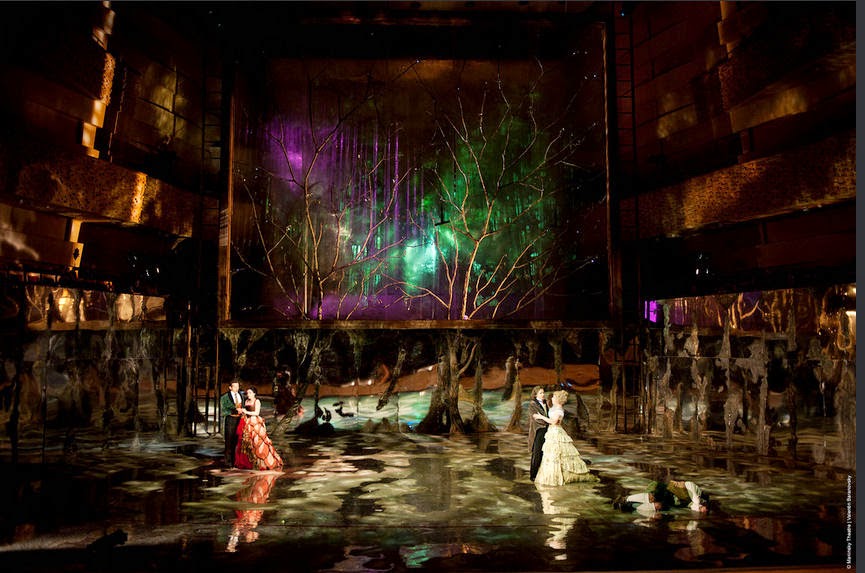 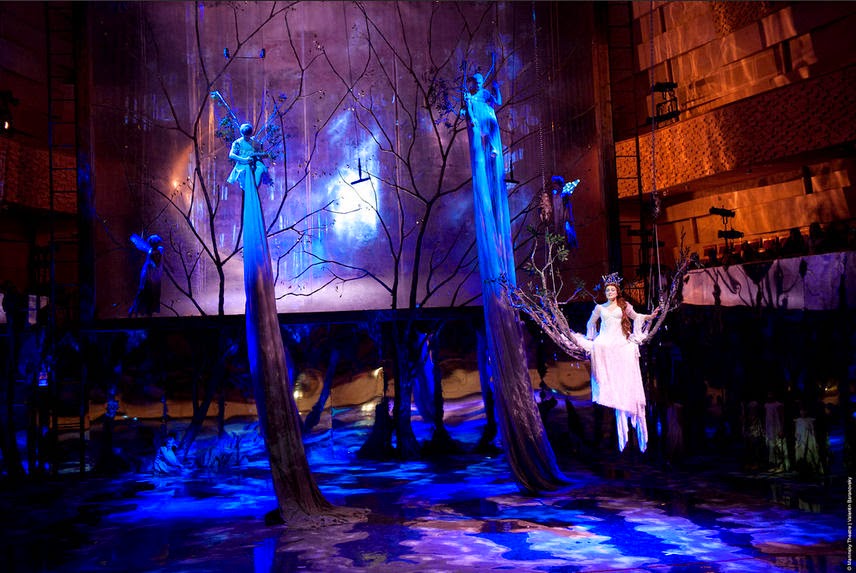 Titania's bower is a beautiful cupped drape of branches that hangs low from the stage ceiling. 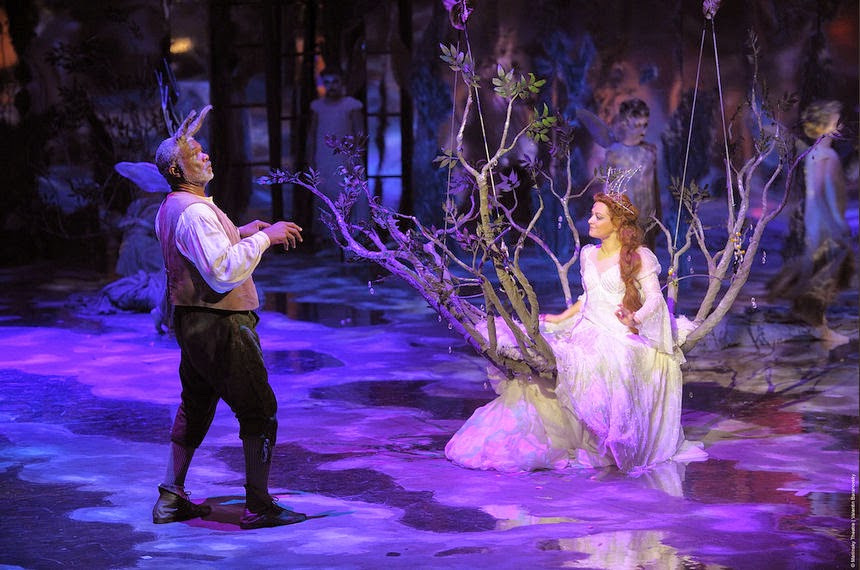 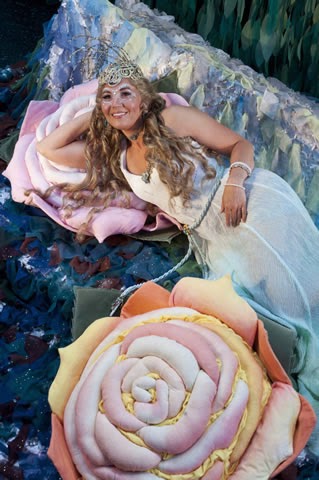 Michael Mitchell's stage creation is mysterious, with moss topiaries and elements of a conservatory. 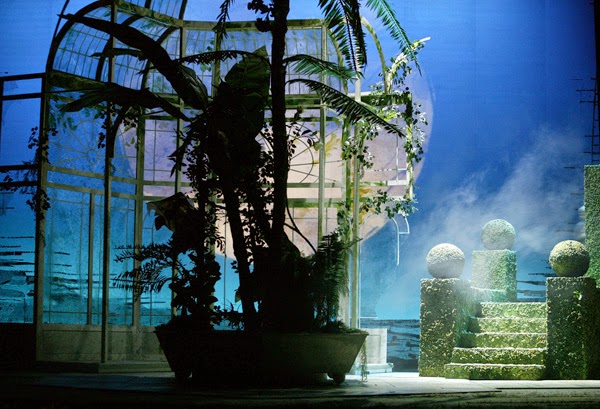 Boston Ballet chose a very simple but breathtaking design for Titania's bower...shining like an iridescent pearl, full as the moon.


University of Delaware took full advantage of the "night" in the play title, embracing the deep blues and glowing golds of the darkness.

Juilliard Opera in New York...this isn't really an image of Titania's bower, but it was so stunning, I admit I couldn't resist.


Cameron Anderson's set design for South Coast Repertory's production was fascinatingly simple, yet stunning.  A single circle inset with different imagery creates a focal point in each scene.  In Titania's scenes, the circle is left open, draped with faerie lights. 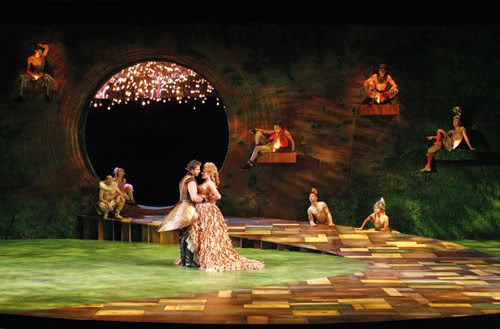 Julie Taymor's production relies strongly on breathtaking glowing and dramatic lighting as well as conceptual sets created from fabric and simplicity itself. 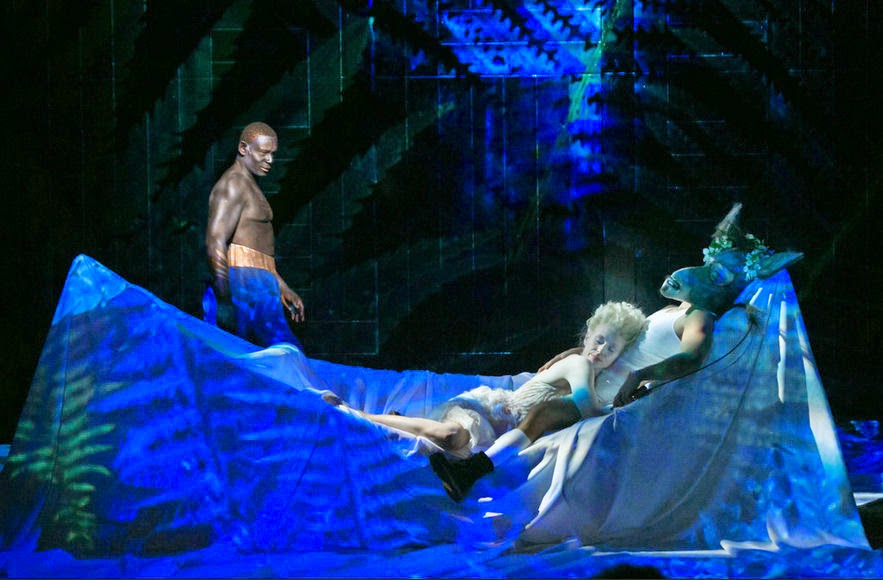 Royal Shakespeare Company's production at Stratford-Upon-Avon is both enchanting and modern, combining a chair that could have come from any living room with twining flowers.

Ballet Nebraska's production is enchanting...I think of all the bowers, this is the one I'd most want in my own back yard.

Open Air Theatre's production seems to interpret Titania's bower in a very literal way based on Oberon's description above.  Since flowers are almost the sole description of the location, a solid wall of flowers creates the mood.

The Michael Grandage Company's production was more contemporary, like an urban fantasy novel, but Titania's bower is a rusting ornate city staircase.

McCarter's Matthews Theater had another creative take on the idea of Titania's bower, placing it above the musical act for the production, in a nest of grasses.


For a one-night-only play, Tilly Strauss created a bower under a tree, decorated with flowers made from whimsical umbrellas.


As a mid-stream distraction for all the ladies in the audience, here's a handsome Puck I stumbled across in my searching.

Then there's the 1935 Max Reinhardt black and white film version of A Midsummer Night's Dream.  I have to *highly highly* recommend a viewing of this version of the Shakespeare play.  It is pure beauty, one of the most breathtakingly beautiful films created in any era, and a moving work of art. 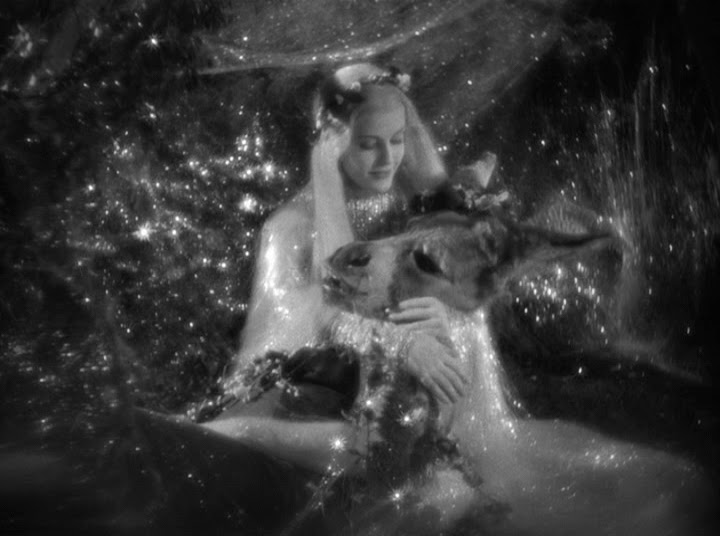 Titania's wardrobe in this film is as beautiful as it is unexpected, glimmering strands of glowing featherlight strands that conceal and reveal her figure.

And then there's Michelle Pfeiffer's version of Titania in the more recent film, whose bower is a nest of ferns, feathers, glittering strands, and loveliness. 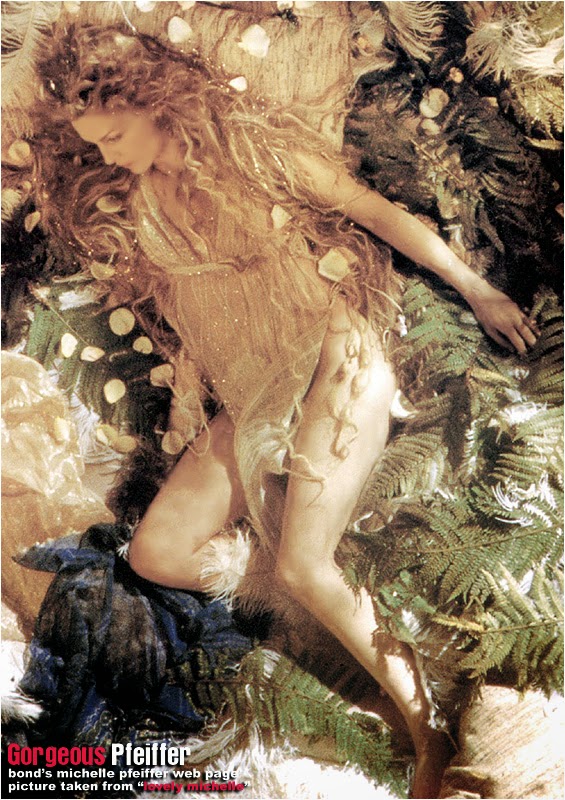 In the scene where she meets Oberon to discuss the boy she has stolen, she is resplendent in her fey palanquin.  This may not be her bower, but I had to share it. 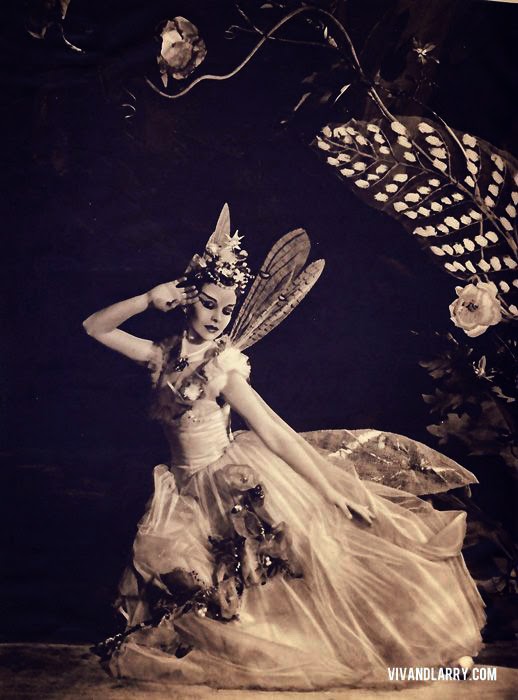 Finally, a few non-photographic images.  First this painting...which was too beautiful not to include as an example.  By N.M. Price.

Victorian Faerie painter Richard Dadd's take on Titania's bower is entirely in keeping with his lush overabundance in his art...it is composed of small faeries instead of flowers or branches.


So....what sort of practical application can there be from all of these breathtaking enchanted bowers?

Perhaps a hanging outdoor hammock bed?  Adorned with vines and shimmering fabrics, this could be a total Titania bower. 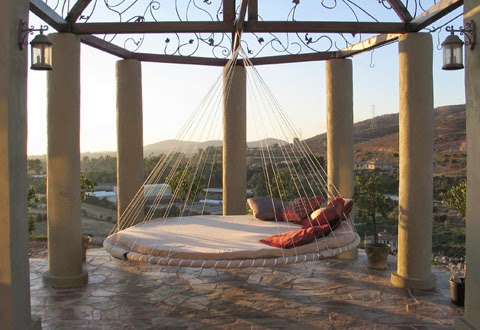 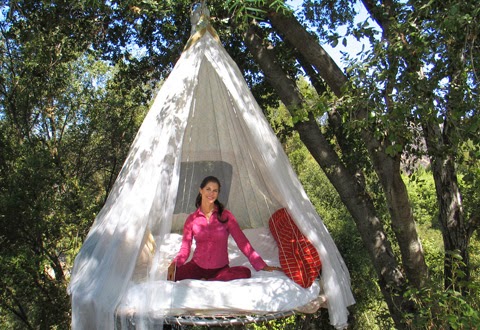 These outdoor loungers are also soooo tempting to me.  And combined once again with vines and rich flowers, perhaps with the white canvas painted elaborately, nestled in a corner of the forest between trees....

Using this concept, I think you could create something similar by stringing rope between the four corners of any pergola if sturdily enough built.

Or buy a "nest rest."  Which I think looks utterly fey with no changes whatsoever. 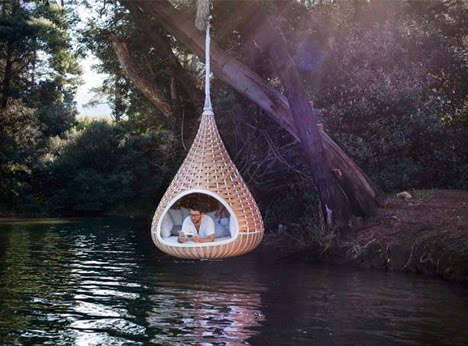 As you unwind and prepare to adjourn to your own bed this Midsummer Night, perhaps the thought of these enchanted bowers may bring a touch of magic to your own dreams!