A Wall Fit for a Mythmaker...Or Three!

The other day on Facebook, mythic artist Jackie Morris posted an album of images of her garden gate and fence.  But it wasn't just any garden fence: It was an utterly Domythic, magical and enchanted garden fence that was a mixed-media wonder of storytelling and creativity.  I was blown away, and immediately asked Jackie if I could share the fence/wall in a blog post.  Thankfully she not only said yes, but she included me in a conversation with Tamsin Abbott, the glass artist who created the phenomenal panels, and Astrid de Groot, the incredible visionary who did the woodwork for the project. 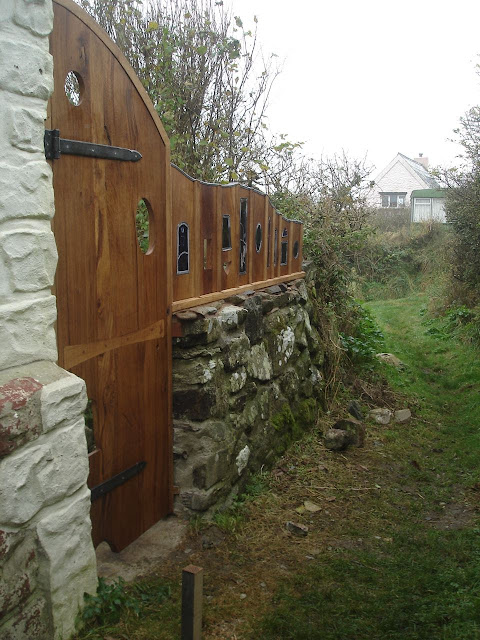 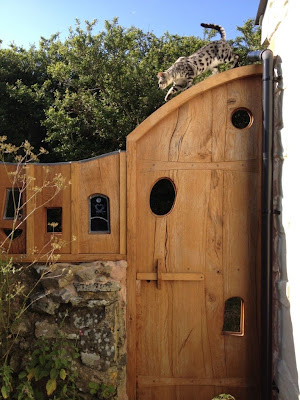 Here is the tale of the creation of this incredible storytelling monument, told from the perspective of all three women. 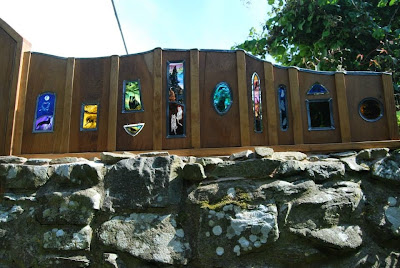 This is how I remember it. I asked Astrid if she would make me a garden gate. Simple. I wanted some glass in it, by Tamsin. I kind of left it at that. Astrid said she had some Welsh Oak and went on to make a garden door fit for a cathedral with medieval joint and of such elegance. I had also talked about something along the top of the wall. The design was kind of left to Astrid, who talked with Tamsin. We were doing a swap, me and Tamsin, painting for glass. Then Tamsin came and stayed and asked what I wanted and I said let's go for a walk and see what we see. Well, fox, cats, butterflies, buzzard, seals, chough, badger, just about everything you can see. She has also thrown in the odd creature for me like the glorious seahare.

I love it. It is a thing of such beauty. 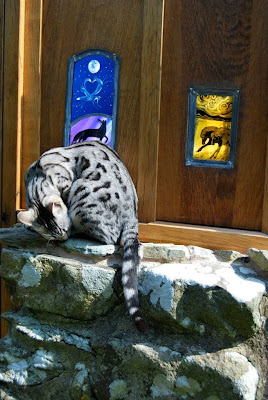 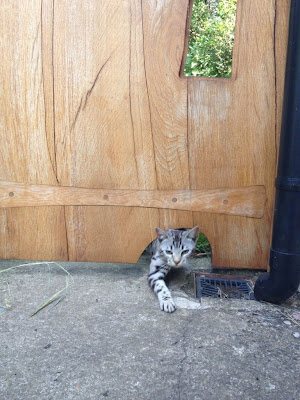 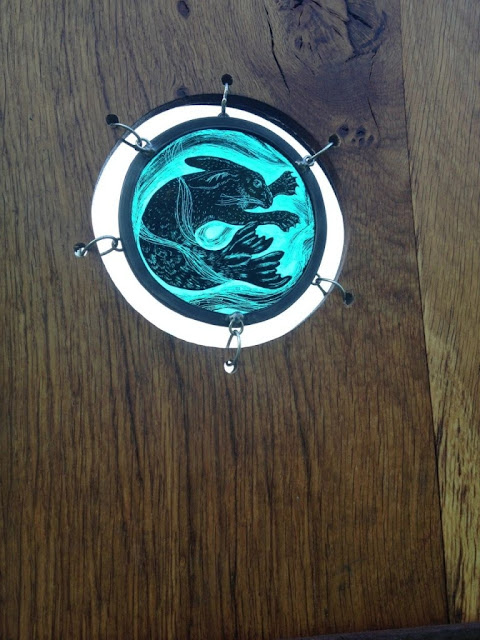 
Jackie’s Wall of Wood and Glass

Jackie Morris‘s house is swathed with the magic air of hill and sea – when I approach up the stony track that leads there my mind begins to loosen from its usual moorings and another world beckons.
The first time I visited Jackie was on a hot day in July two years ago. She introduced me to Astrid, the woman of wood, and we talked about the idea of making a wall and a gate of wood and glass.
Scribbles were made on pieces of paper and technicalities were discussed. But not for long. The main plan was inspiration. The ground around the house, foot trodden over the centuries by person and beast, sent out the first whisperings, tendrils of ideas that began wrapping themselves around our ankles. We carried them out onto the hill where the singing of seals embellished each curlique with sighs. Meadowsweet spoke of fairies and otherworlds whilst a fox ran, daylight-brave, across broken walls of cottages long fallen to bracken and bramble.

Buzzards and ravens cut clear sweeping shapes against the bright evening sky followed by a trail of stars as night fell. The following morning a badger cub bustled across a lane rich with campion and foxgloves and I was well and truly entranced. The land was like a tapestry of souls kissing our faces with butterflies’ wings.

These seeds were planted and thoughts began to grow. The woodwork, oak bold and strong, was completed within 6 months but the glass has taken a little longer to complete. Giving it time has allowed more and more magic to creep in. One piece was so heartfelt that it has remained in the house and another had to be made to fill its place in the wall! The inspiration from this has tumbled over into my other work so that I sometimes feel as if I have grown wings and can look down upon the land and see the spirits of then and now.

Last weekend I was back. July again and hot and sultry. I had not seen the wall in place before and, like Jack’s beanstalk, it seemed to have sprung from the ground and created an enchanted space of its own. I almost feel as if I have had little to do with it being there! I added a couple more panels of glass, we drank a few more glasses of wine and the wall, the magic and friendship just continues to grow. 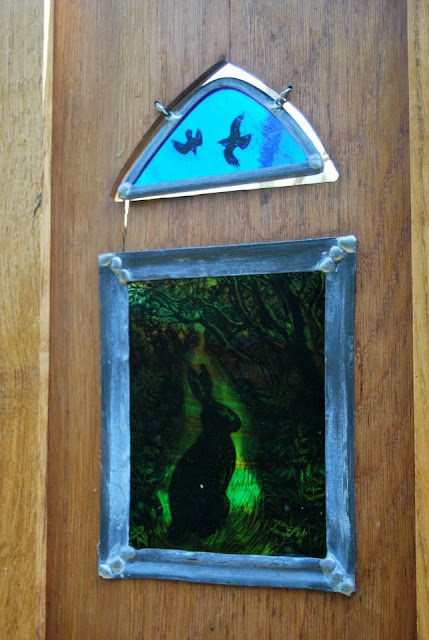 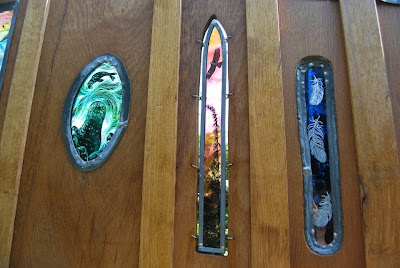 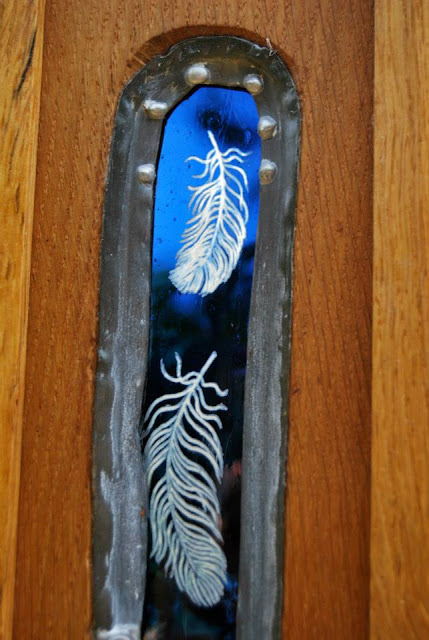 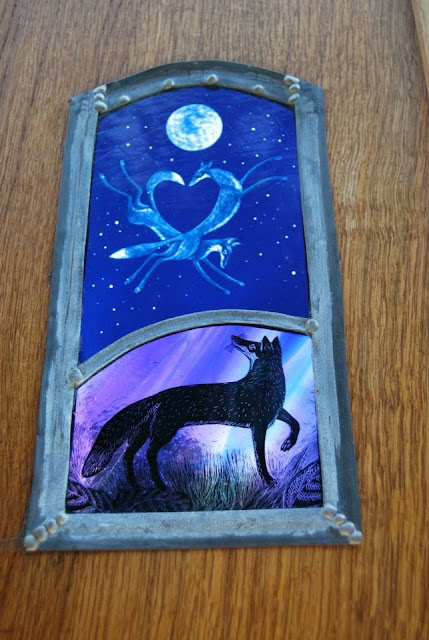 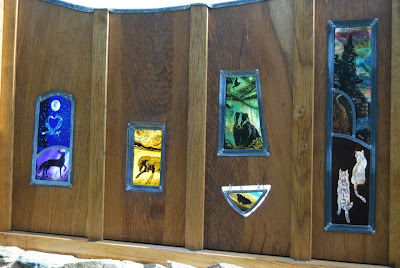 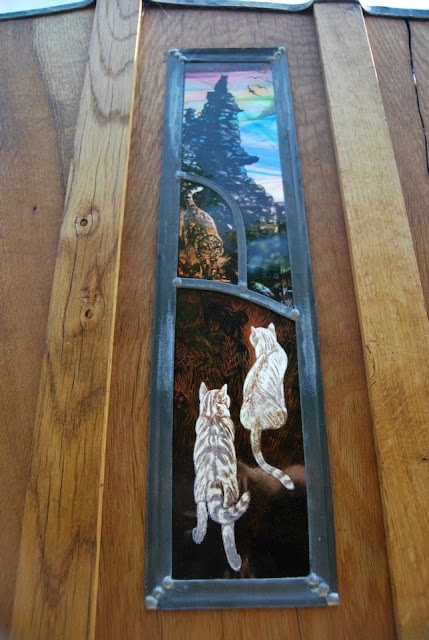 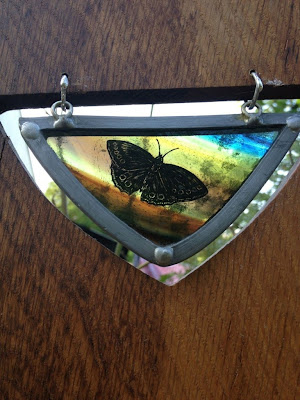 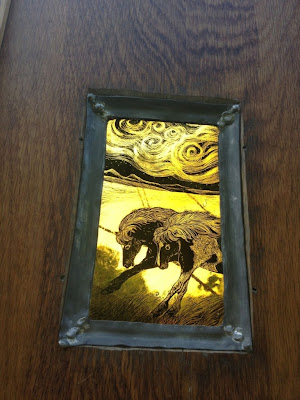 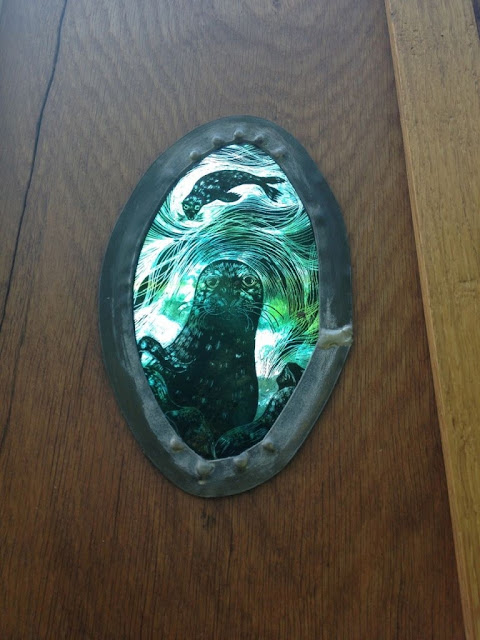 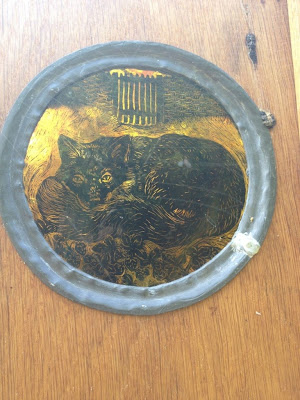 "I want a tall gate next to the wall in front of the garden", I had no clue what she meant.  I never noticed a wall anywhere.  I could tell Jackie had it all clear in her mind.  "And on the wall more wood."  She talked about Tamsin who makes beautiful glass pieces and how she wanted us to work together on this. I went over to see what she was going on about and where she wanted that tall gate, so Jackie showed me her back garden with the wonky wall and a drainpipe where the gate would come.  "Don't move the drainpipe please," she said.  Ok, that's for later to break my head over I thought.  She showed me some of Tamsin's work "oh that is really beautiful.  I could see that in combination with wood." But I had no clue yet.

Next an invitation from Jackie: "dinner with Tamsin and you two stick your heads together and get started."  I felt the pressure because Tamsin came from far so I wouldn't see her easily.  We had dinner, and Jackie showed us the space.  We went for a evening walk so we got a feel of the surroundings and all the living creatures, and the ideas started to come. I came home with a scribbles of sketches of what became the tall gate with the wall pieces, but more important I got a good feeling about this project.  I could vaguely see it all in front of me and felt that Jackie fully trusted us with it.  I felt free and couldn't wait to get started, and the gate formed itself.  I followed the natural lines of the Welsh oak boards that came from a garden in the area where the trees had fallen down after a storm. And I trusted myself to find solutions for the technical problems that would occur but all in it's own time, so I could enjoy the work.

Here are links to Astrid's blog posts about the creation of the project.  Blog 1  Blog 2 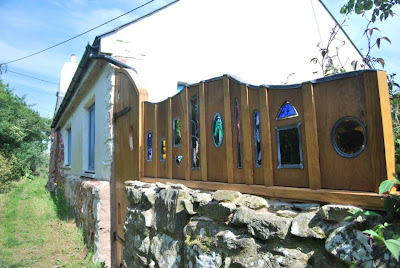 Jackie recently released a beautiful novelization of East of the Sun, West of the Moon.  She wrote the version of the tale and created all of the illustrations.  Jackie and Tamsin are also members of the Sisterhood of Ruralists, a group of enchanted artists that deserves a blog post of its own.

Jackie's outdoor space also features a couple of other incredible mythic pieces I also have to share. 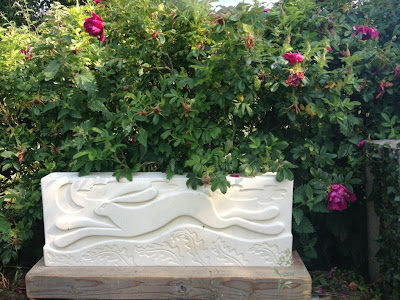 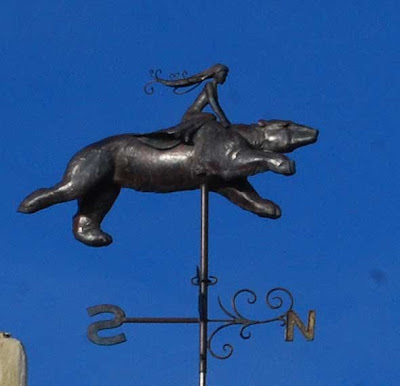